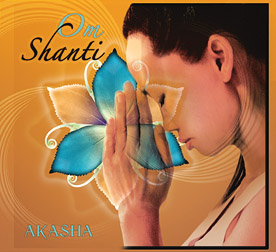 Akasha is an assemblage of different spiritually-minded musicians from around the globe, who work together to create a pan-cultural collage of chant and music. With their second album for Malimba Records, they pick up where they left off with YOGA SPIRIT by presenting an album of soft chant, light acoustic ambiance and an Asian touch. Subtle tabla beats provide the album’s pacing, while airy guitar melodies and Bikram Singh’s flute playing add to the album’s soothing, yoga-friendly atmosphere. Other touches, like sitar, drone ambiance and shimmering dulcimer-style strumming add to the majesty of the album. Most of the songs have light chanting, which is performed in a soft, tender manner that is a little reminiscent to the group Rasa.